Stocks started the year on a strong note, and it seemed like December and its steep sell-off was firmly in the rear-view mirror.

But that notion was put to the test on Friday. The Dow posted its third straight negative session — its longest losing streak of the year — although the index did post its seventh consecutive week of gains. The S&P managed to eke out a small gain of 0.07 percent on Friday after spending much of the day in the red, and after falling the prior two days. Fears about U.S.-China trade negotiations as well as slowing economic growth continued to weigh on markets throughout the week.

One market watcher says don’t believe the recovery — stocks are heading back to their December lows.

Joule Financial’s Quint Tatro sees 2,800 as a key level of overhead resistance for the S&P 500, and until the index can once again reach that level, he believes there will be more losses.

“The opportunity has been to sell into this rally, or if you’re aggressive, short. We have risk/reward here, I believe, that’s fantastic on the short side,” he said Friday on CNBC’s “Trading Nation.”

He said several stocks, including Alphabet, Amazon, and JPMorgan, are “reversing at key levels,” which leads him to believe that the recent recovery in stocks was a bounce “within a bigger bear trend, and not a new bull market.”

But some are more optimistic and believe there’s solid support for the S&P to move higher at least in the short-term. Piper Jaffray’s Craig Johnson says investors should use dips as a buying opportunity since stocks aren’t headed toward a major pullback.

“[A]s I look at the charts, we came right up to the 200-day moving average. We paused at that level. Now as we correct back the level, we need to be watching is 2,615,” he said Friday. “There’s a lot of support that comes into play there from the October/November lows, and also at the 50-day moving average and also the downward resistance line which will now be support. So a break below that level … that’s going to be something more to unfold,” he said. 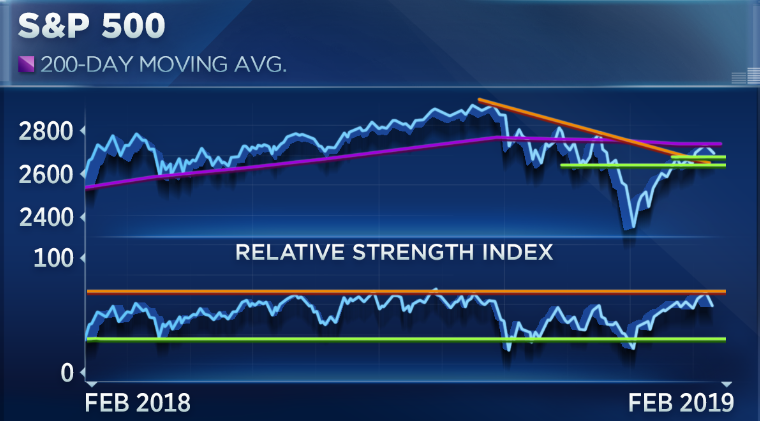 While Johnson believes it’s safe to “buy the dip as long as we stay above” 2,615, he is expecting a “market that will be largely range bound for the year.”

Disclosure: Joule Financial has positions in ETFs that short the market.